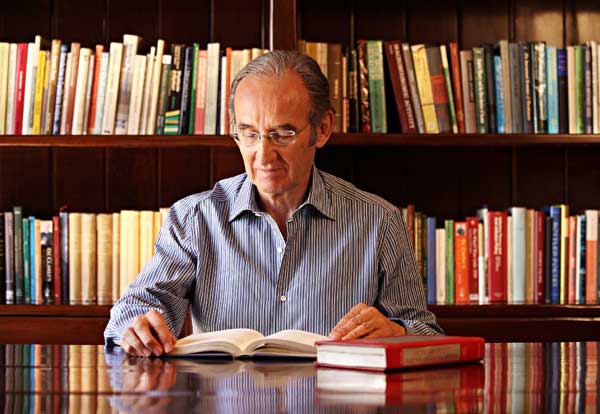 By simply glancing Nicolás Catena Zapata’s CV, one can immediately tell that he’s no ordinary businessman. He tested out of his last year of secondary school, then went on to graduate as one of the top of his class in Mendoza, and at the tender age of 22 he graduated with a PhD in economics from the National University of Cuyo.

By the age of 23 Nicolás took over management duties of the family business, which at that time was specialized in the production of bulk table wines with strong national advertising campaigns, namely the brands of “Crespi” and “Facundo.” However, in 1982 Nicolás introduced a major paradigm shift to the business: he sold the table wine brands and accompanying production facilities in order to exclusively focus on fine wines.

These were strategic decisions inspired from Nicolás’ time as a professor of Agricultural Economics at UC Berkeley, California, when he discovered Napa Valley, a mere 30-minute drive away. At the time, Californian winemakers had decided to compete with the best French wines and were heavily investing in vineyards and wineries under the leadership of the famous Californian winemaker Robert Mondavi, founder of the winery that bears his name.

From this example, Catena immediately set out to pioneer his own wine revolution in his native province, positioning his surname as a synonym for Malbec and his company as the largest exporter of premium Argentinean wines. Nicolás Catena is a true polymath, his wide range of interests comprises readings from his library collection of history, math and economics, along with classical music.

He spends time between Mendoza, Buenos Aires and international destinations where he travels to promote his wines. After completing his master's degree at Columbia University in New York in 1970, he has since been studying the economics of Imperfect Competition. Together with Roque Fernández and Carlos Rodríguez in 1978, he cofounded the Center for Macroeconomic Studies of Argentina (CEMA).

Why is it so difficult to kick-start Argentina’s economy?

Historically speaking, in order to lower inflation a certain degree of unemployment and a recession are inevitable. Companies raise their prices by applying a margin over their variable costs, which ultimately depends on wages, taxes and tariffs, and exchange rates. By 2016 tariffs and exchange rates had normalized, yet salaries grew in accordance with expected inflation. These higher base costs were not significantly offset with sufficient demand due to the current anti-inflationary policies put forward by the Central Bank. The end result of this discrepancy is an oversupply that could not be sold.

How do you explain the reaction of companies?

As sales decline, companies react by lowering their prices – i.e. margins - until at some point supply and aggregate demand rebalance. This may take place over a long period of time, and therefore we should not be surprised if the economy has not yet improved given the target inflation rates. In any case what has happened so far indicates good macroeconomic management.

The debate of shock vs gradualism is held by those in and out of government. Do you think the path taken so far is correct?

A shock policy would have involved quickly eliminating the fiscal deficit by reducing expenditures. My impression is that the goverment did not receive a voter mandate for such drastic measures. Instead, the mandate was gradualism in terms of adjusting utility tariffs, reducing subsidies and public sector expenditures. And that is what is being done. That is why I see this as an academic discussion.

There is an on-going debate between interest-free or financed payments in place. Do you think the government made the right decision?

I think it’s always best to clearly inform the consumer about all available options. I agree with this measure. In a competitive economy prices will sooner or later reflect real costs. Only those who have no business experience mistakenly believe that prices can be set without taking into account competition.

Do you think the 17% inflation target will be achieved?

I think it can be done, although the biggest obstacle will be the wage increases negotiated with the trade unions. I think that the dollar exchange rate will not exceed this percentage and that public utility rate increases will be moderate. For this reason, the most important costs that ultimately determine prices will be wage increases, which will surely exceed 17 percent. If this happens, increased economic activity will be delayed and the historical margins of corporations will decrease. So in a way, one could say that unions who ignore the Central Bank’s inflationary target will be responsible for less economic activity.

What is the role of the entrepreneur in this context?

Given my theory of how prices are formed in our economy, entrepreneurs will be the victims in this game between expectations of future inflation by the unions versus the target inflation set by the Central Bank. If there’s too much discrepancy between these two differing visions, then sales fall, historical margins shrink, net profits and productivity decline. Companies do not form prices, as they do not have the monopolistic power of unions, instead they simply apply a historical margin on their variable costs depending on the unique competitive circumstances to each of their sectors.

What are we lacking in Argentina in order to become competitive?

This is a complex subject in economic theory. Supposedly, countries export what they can produce more cheaply and import those goods that would cost them more to produce. Being more competitive would mean reducing costs compared to those of other producing countries, which is always good for the consumer, whether there are exports or not. But what really defines whether or not we can export a product is the real exchange rate, and what most damages the export exchange rate are import restrictions, be it tariffs or any other type of restriction. This was demonstrated by socialist economist A. P. Lerner many years ago, who stated that all taxes on imports are equivalent to taxes on exports. If imports were truly free, then the demand for dollars would also grow, and consequently so would targeted exchange rates and hence exports. We would be "more competitive."

What would happen to the jobs that are lost?

Supposedly, the problem is the loss of jobs in the protected sector, although other jobs generated by higher exports derived from the higher and more favourable exchange rates are never considered.

Electricity rates, transport tolls, health insurance plans and prices in general have all increased. How much does it have to do with adjusting the inherited situation and how much is a future strategy?

It all has to do with adjustments. The new administration inherited a dire fiscal deficit, artificially low exchange rates (an overly strong peso), and overly subsidized public utility rates. Starting in 2016, the economic policy has been notoriously professional, rational, and mindful of real wages, perhaps the least popular in terms of political options. And it has had notable successes such as the rapid repayment of foreign debt and repatriating and legitimizing capital. You really cannot ask for anything better.

Is it correct to issue debt at current levels?

There is no other political alternative. Those who criticize indebtedness should also suggest acceptable alternatives to paying down deficits, or if they prefer the "adjustment." Argentina´s debt is the consequence of exorbitant public sector spending growth during the last decade that was financed with an inflationary tax.

What changes can be expected in Argentina with the arrival of Donald Trump in the USA?

We must wait and see to know exactly what his protectionist policies will consist of. Anyway, any protectionist action is harmful since it leads to contagion and reprisals. Protectionism has always been promoted in Argentina, although it has been proven time again that it only serves a protected group and is detrimental to the rest of the population.

Why do you think that the informal employment is so hard to combat in Argentina? The stats remain the same despite different administrations…

It’s clearly understood that the punitive tax rate on wages incentivizes an underground economy. The problem for the government is how to make up for the lost revenues generated by these taxes. Increase other taxes? Create new taxes on consumption, on profits, on savings? It would seem that the only solution in the future will come from economic expansion and growth.

How necessary is tax reform in our country?

Our tax rates are among the highest in the world. The only suggestion I can think of is to lower the tax rates, thereby relying on the eventual increased revenue stream as a consequence of increased economic activity and growth. I have a lot of faith in the government ´s growth strategy based on the public and private sectors’ investment shock.

When will the local economy be reactivated?

It would not be advisable to rush a reactivation. History teaches us that dramatic increase in sales also raise inflation expectations and could greatly complicate wages in labor union discussions. I believe that the Central Bank is implementing a well-studied monetary policy based on an objective focusing on lower inflation, even if this means delaying any reactivation. The recessionary effects on employment will have to be dealt with by insurance mechanisms, but never abandon the inflation targets already defined.

What are the challenges faced by the wine industry in our country and at the international level?

Today the main concern among winegrowers and regional economies is the evolution of the real exchange rate. The significant inflow of capital derived from increased confidence, legitimizing and repatriating undeclared overseas capital, short-term capital investment and, above all, the external public financing necessary to cover the national and provincial fiscal deficits, will help to depress any dollar exchange rate increases used to finance the government debt. At first, we will be one of the victims of the public deficit when combated with gradualism, but we also clearly understand that the government has no other alternative. It is something transitory. The wine sector is optimistic over the long term, especially considering the excellent reputation that our wine industry has earned over time throughout the world.

Print
BACK TO "PRESS"