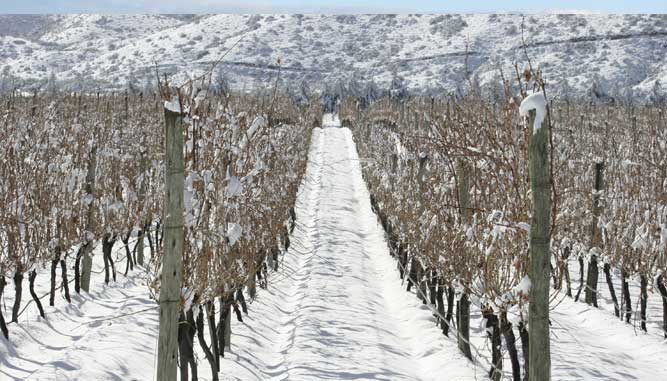 "Every year that passed I began to believe more in my father's theory that the greatest things in life come from luck rather than from planning or intelligence. For how lucky had my father been that he set out to find cool climate and ended up with extraordinary soils ideal for making balanced wines, and increased tannins - the main conduit to ageability - from sunlight."

The Most Studied Vineyard in the World

Nicolás Catena Zapata planted the Adrianna vineyard in Gualtallary with a single goal in mind: to find the coolest location for growing vines in Mendoza. Originally, viticulturists feared that Bordeaux varieties such as Malbec and Cabernet Sauvignon would not ripen in Adrianna. In terms of the Winkler classification, a method developed in California to add degrees and categorize regions according to their climate, the weather at Adrianna is between zone 1 and zone 2 depending on the year, putting it between Burgundy and a very cool part of Bordeaux. Even so, no French woman would dare to plant Cabernet Sauvignon or Malbec in Burgundy.

Yet that is exactly what the Catenas did in the high-altitude soils of Adrianna. Nicolás planted the Adrianna Vineyard with Cabernet Sauvignon and Chardonnay cuttings from France, and with Malbec taken from Lot 18 of his 75-year-old Angélica vineyard. Over the next few years the wines consistently proved to have more minerality and more acidity than wines from other sites in the Southern Uco Valley at lower altitudes—sites such as Altamira, La Consulta and Eugenio Bustos. The Adrianna Cabernet had more pyrazines—the molecules that give the variety its characteristic capsicum flavour. The Malbecs had more grip and denser tannins, and the Chardonnays were both mineral and "fat". 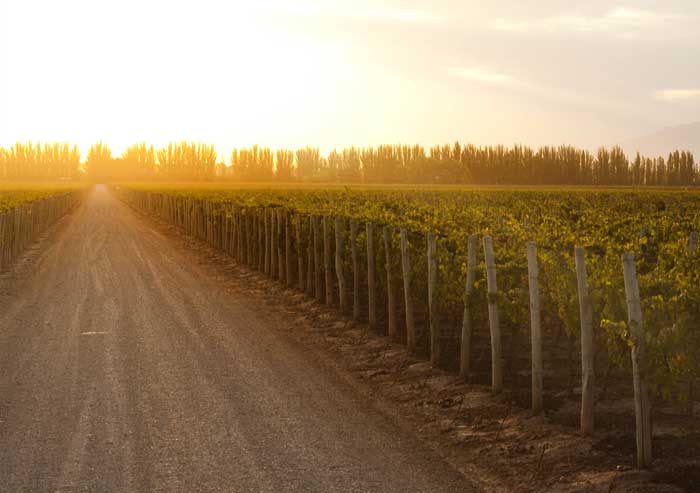 Much of the difference lies in the hours of sunlight and in the brightness of the sun, which permits photosynthesis to run freely and ripen aromas and tannins, while the cool climate allows the vines to preserve acids and keep the sugars in check. In the lower-altitude areas of Mendoza in the East, most musts need to be acidified, but the natural grape acidities at Adrianna are optimal, and no additives are necessary to balance wines.

And because of the slow ripening in cooler climate, fully mature tannins can be achieved with brixes below 24 and resulting alcohols in the 13% range. To Laura Catena, the surprise was not that the high-altitude wines of Adrianna had better natural acidity, but "that the levels of polyphenols and tannins were so much higher than for similar plant populations at lower altitude."

"Each individual plant, not unlike a patient, has its own characteristics, its own individuality that we must preserve." 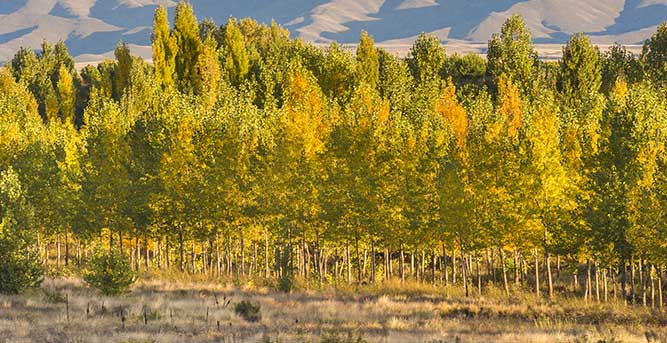 At Adrianna, high-altitude sunlight would prove to have an impact far beyond that of extending photosynthesis. It took many years of observation to figure out that bright mountain sunlight is much stronger at high altitude than at sea level. Studies done by vineyard viticulturists working with PhD students from the local Mendoza University found that sunlight intensity caused significant increases in the skin tannins of the high-altitude Malbec.

One student, Federico Berli, was able to separate the effect of sunlight from the effect of cool climate by covering the vineyard with transparent sheets that only shielded the intense high-altitude rays but not the sunlight needed for photosynthesis to happen. Dr. Laura Catena believes that this natural adaptation occurs because the grapes develop thicker skins at high altitude to protect the seeds from the sun—a sort of natural sunscreen. It is an issue the Catena viticulturists continue to explore to this day.

The geologic origin of the Adrianna vineyard dates back to the Eocene period, over 50 million years ago when the Andes Mountains were formed and volcanoes and earthquakes ruled the land. Adrianna’s canto rodado (round boulder) subsoil made of volcanic (igneous rocks solidified on the surface) and plutonic rocks (igneous rocks solidified below the surface) was laid down and then covered by marine fossils that dispersed as the mountains rose over millions of years. During the subsequent ice ages, the melting glaciers carried down stones and pebbles which were deposited on top of the volcanic subsoil. This volcanic subsoil holds one of the secrets of Adrianna: it’s phenomenal drainage. No matter how hard it rains, it is impossible to get very high yields or botrytis rot at Adrianna, because the water seeps so quickly down through the large boulders in the subsoil.

The geologic events that explain the particularly heterogeneous topsoil of Adrianna, so rich in limestone and gravel, are more recent. Most of the differences throughout Adrianna lie in the topsoil, which is predominantly of alluvial (formed by the passage of rivers and glaciers) and eolic (formed by wind) origin. When we first started studying Adrianna’s geology, we couldn’t understand why there were so many parcels dating to different geological times, yet all with the structure of a dried river bed. What we found was that during the formation of the Jaboncillo and Peral hills to the North, the river that went through Adrianna had been forced by seismic activity to gradually move down South, creating a series of terraces where as the river dried, limestone deposits formed.

And depending on the speed and violence of the earthquakes that formed the hills, the river would move its flow in different directions and leave behind the white stones and limestone deposits that we find all over the vineyard today. Because of the constant movement down the river, the stones became rounded and smooth.

But as the rivers dried out, the calcium carbonate (main component in limestone) would make the stones turn white and form layers of limestone and chalk throughout. Limestone soils are ubiquitous in many parts of France, including Bordeaux, Burgundy and the Jura, and many people think that they hold the secret to the elegant flavors of French wine. Yet, in Bordeaux for example, great wines are also made in areas that have gravel and clay rather than limestone, so I have always been somewhat skeptical of the “limestone cult.” What we do find particular about these limestone soils is that they have two seemingly contradictory properties: they have excellent drainage but they also retain water for a longer time than gravel, but less than clay. This structural property makes them ideal for certain vine stress situations where intense sun and heat follow rains, and vines that have access to small amounts of water fair better during droughts. Also, vines from limestone soils tend to have lower brix (and eventually lower alcohol) but very high acidities, and that is often what we winemakers are looking for.

When we started studying the soils of Adrianna over a decade ago, we were making 5 soil pits per hectare. Today, with 70 soil pits per hectare, we have a much deeper understanding of the vineyard. We vinify between 200 and 300 separate lots at Adrianna and usually keep them completely separate in barrel, so that they can each run their natural fermentations. The Adrianna vineyard, because of its particular location surrounded by hills and near the Las Tunas River, is covered by a light mist in the mornings, which makes it particularly rich in native yeasts. These native yeasts and their interaction with their various parcels of origin are part of the native flavor of Adrianna.